This page has just been started and will have much, much more added!

December 11, 1935 – Bill Wilson entered Towns Hospital in New York City for the fourth and final time to “dry out” from his need for alcohol. While still in the hospital on Dec 14, an old friend, Ebby Thatcher visited and related that he had stopped drinking by using a popular religious group of the day called The Oxford Group. After Ebby left, Bill fell into a deep depression (his “deflation at depth”) and had a profound spiritual experience after crying out “If there be a God, let him show himself!” Bill called in Dr. William Silkworth who assured him he was not crazy and told him to hang on to what he had found. In a lighter vein, Bill and others would later refer to this as his “white flash” or “hot flash” experience.

May 11, 1935, After failing to sober up any drunks in New York Bill W went to Akron Ohio for a business venture which failed and he found himself at the Mayflower Hotel very discouraged and in poor spirits. He was tempted to enter the Mayflower Hotel bar when he realized instead that he needed another alcoholic. He telephoned members of the clergy listed on the lobby directory and eventually reached Henrietta Sieberling who was also a member of The Oxford Group. Bill introduced himself as “a member of the OG and a rum hound from NY”. Later that evening Henrietta met with Bill at her home and arranged a dinner meeting for the very next day with Dr. Bob Smith and his wife Anne.
May 12, 1935, it was Mother’s Day when 39 year old Bill Wilson met with 55 year old Dr. Robert Holbrook Smith for a dinner at the Sieberling estate. Dr. Bob, too hungover to eat dinner, planned to stay only 15 minutes. Privately, in the library, Bill told Bob of his alcoholism experience and Bob opened up about his similar battles. He and Bill talked for over five hours.

September 30, 1939 – the first nationwide publicity was a Liberty Magazine article about the newly formed Alcoholics Anonymous. This generated about 800 inquiries from around the nation: 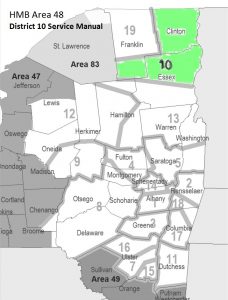 District 10 is one of 19 districts located in the greater New York State Area 48 HMB (Hudson, Mohawk, Berkshire). We are located in the far northeast corner of the state bordering Canada and Vermont.

Opening Doors to a Life Without Alcohol